Notice of Race (for print ▼)

Only the Spring and Fall Series are covered in this Notice of Race. Both series will be scored separately and then combined to score the Club Series Championship.

The first warning signal will be at 1845.

These series will be governed by the rules as defined in The Racing Rules of Sailing.

The Harold Asselstine Memorial Trophy document ▼ details how overall placing in a spinnaker division applies to the awarding of the trophy.

The Sailing Instructions ▼ and any additional documents are available either in the clubhouse or downloadable from this web site. Any changes to the Notice of Race will be incorporated into this online version and posted as a notice to competitors.

The Official Notice Board

The official notice board is in the clubhouse's enclosed porch. Notices will be mirrored on the web site within 24 hours of being posted.

Races will be sailed according to Essex County PHRF Rules except that there are no minimum crew limits.

There will be a single JOG class.

The PHRF class may be divided into PHRF A & B. The RC will post a notice of splits before the first race.

Coloured pennants matching the class flag are to be flown from the backstay for JOG and PHRF classes.

Despite rule RRS 78.1, a current valid measurement or rating certificate is not required.

Please complete the online registration form as early as possible. A $40 annual entry fee must be delivered to the Race Office before racing. 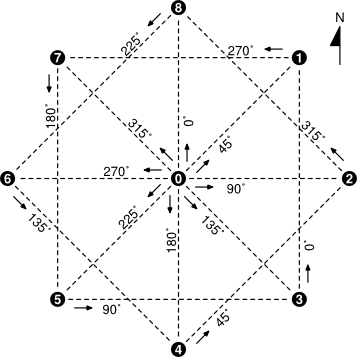 The racing area shall be centred at Mark O, 1.4 miles due magnetic north from outside the Pike Creek channel on Lake St. Clair. Marks are 0.65 nautical miles from the centre mark and arrayed in a regular octagon with mark 8 pinned to magnetic north (using magnetic variation of 7.69ºW).

Marks are white can buoys --- even numbered can buoys have an orange top.

Courses will be modified olympic and windward-leeward.

Boats must come out to at least half of the completed races in a series to be eligible for an award.

Within each class, the Club Series Championship sums the results of the Spring and Fall Thursday-Night series. To be eligible for this award a boat must be

*At a minumum, in any South Port Sailing Club event in 2018, boats must come out to at least half of the completed races in a series or regatta to be eligible for an award; either of the Monday Spring or Fall Series will suffice; however, the Monday series have a stronger particpation requirement which must be met.

The Spring and Fall Series will be scored independently. Only boats that come out to a race in the series will count toward the calculation of the series’ DNC score.

For the Club Series Championship, the score will be the total of the scores for both series — ties will be broken as per Appendix A using the same excluded races as in each series.

For the Spring and Fall Thursday-Night Series new and interesting 1st, 2nd, 3rd and pickle prizes will be awarded in each class. For the Club Series Championship flags for 1st, 2nd & 3rd place and perpetual trophies will be awarded in each class. These series will count towards the awarding of the Harold Asselstine Memorial Trophy for outstanding performance in a spinnaker class. All prizes will be presented at the Awards Banquet.